Being a westerner by birth, I’ve been given the privilege of being raised into a society where entertainment and leisure are not only excessively available, they are a way of life. I’ve been indoctrinated into the mindset that: as long as you have the resources and the motivation, you can have anything you want. In my hometown of Los Angeles in Southern California, where expensive cars and expensive clothing are paraded like peacock feathers, that mindset couldn’t be more prevalently materialized.

Let me start off with saying that I am thankful for this city. I love the people here. I love the freedom my community has set before me and the many opportunities it has offered. I would also like to mention that I find absolutely nothing wrong with pursuing your dreams and with working hard at making a better life for yourself and for your family. That is the American Dream and that is what many people from around the world migrated here for. I myself have pursued a career in entertainment: composing and licensing songs to the independent film and video game industries, and have worked as a graphic designer, designing ads, album covers, websites, etc. I’ve also enjoyed the benefits of being a state employee: pension, 401k, medical. I’ve experienced living comfortably as an American taxpayer, residing in an affluent enough part of town while enjoying the occasional vacation.

I would have continued this career path if it hadn’t been for a recent paradigm shift. This paradigm shift not only involved a change in my socioeconomic and political views, but in my view toward human beings and even life in general.

An age-old itch in my soul had been prodding me to grasp a better understanding in the deeper things that exists outside my immediate, self-centered, materialistic world. As I gradually gained more knowledge through my exploration of history, political science and current events, my worldview began to expand. My eyes were opened to the vast array of events that occur worldwide, many of which aren’t accurately reported in the west, if reported at all. I began to understand that the vast majority of human souls that exist around the world have an outlook on life that is completely foreign to me – an outlook that is gripped in fear, suffering, and uncertainty. It stands in stark contrast to the indulgent lifestyle of most of us westerners. But what struck me most wasn’t the disparity in the standard of living between westerners and those in third world countries; I had already known that there were less fortunate people out there, and I had already known that I was fortunate to be an American! What struck me most was the actual ratio of rich to poor on the global scale. What struck me was my err in perspective. According to the Occupational Wages around the World (OWW) database, and the World Bank: if your annual income is over $33,000, you are in the top 1% of earners in the world. What had struck me further was the ignorance and apparent lack of concern that most of us have toward these numbers. Furthermore, poverty is just one condition that umbrellas numerous other social issues such as human trafficking, hunger, clean water sources, disease.

As I gained proper perspective, I started to view the western lifestyle not so much as a privileged haven as I once had, but more so as an illusion. It is a dreamland that if not waken up from, can leave you soft and disillusioned. Most of us Americans go about our day unaware of the gold we stand on, and the freedoms we enjoy. Yet nothing warrants our claim to the location of our birth save the will of God.

As I’ve mentioned before, it is an absolute blessing to have been born in such a wealthy nation and we should not shy away from utilizing freedoms given to us. But this awareness has changed my worldview, and now prevents me from continuing my previous way of life. I cannot continue in the way I once had, knowing what I now know.

So, this is my plan.

There are many missionaries, activists, volunteers, and humanitarians throughout the world who share the same heart and vision. These people dedicate their time and energy into helping others in the fields of human trafficking, disaster relief, community development, healthcare, social justice, disease treatment and prevention, food and water assistance. Most of these workers are volunteers in need of support and whose causes are often hidden from the public eye. Most lack the time, the funds, and the skill set to raise awareness for their causes. Some non-profit organizations have a communications department that focuses on such tasks but its projects are often constrained by policies, and its scope is usually broadened  and unfocused on the individuals themselves.

My goal is to use the media skills I’ve once used to build my own career, that being: writing, photography, video production, music production, and graphic design, to raise awareness for the missionaries and humanitarian workers abroad. I will spend about a month at a time at various mission locations, immerse myself in the environment by physically involving myself with their projects, and document everything through photos, video, and interviews. When finished with a particular mission site, I will produce film documentaries, photos, and articles to tell the untold story about the workers there, and the people they help. The media will be used to raise awareness and financial support for these workers, by presenting it to their supporters back home, and also to gain new supporters through social media.

Thank you for hearing me out. I have a burning desire to do this and I can’t shake it off. This world isn’t what it seems. I’m not gonna change the world; I’m just one person. But I refuse to be forced back into a paradigm I’ve been set free from. My eyes are open and I can’t shut them. I pray I be as effective as I’m capable of and that my hands and feet never tire. Thank you so dearly again. May God bless you as He has me. 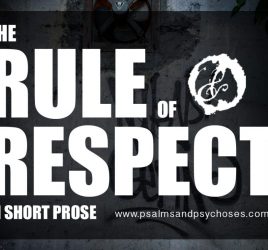 The Rule of Respect - In Short Prose